[Note: I composed this essay during a Writing Project summer ‘open’ program in 2016, focusing on preparing high school students for the ‘personal statement’ component of their college application. As is true of most Writing Project programs, we learned to teach this peculiar genre of writing by doing it. The prompt at the head of this essay–one of many offered to us by instructor Jeff House–is the one I chose to respond to for my own personal statement.

Since I learned recently that this essay will be appearing in the November 2017 issue of California English, I thought it would be a good time to also post it on this ‘back up’ blog that I use as an alternative to my primary WordPress blog–jlovellsjawp.com]

“Reflect on a time when you challenged a belief or idea. What prompted you to act? Would you make the same decision again?”

A personal essay by Jonathan Lovell

My 7:30am sophomores entered the room, bleary-eyed and sullen.

I had my clipboard ready at hand.

“You all read Conrad’s ‘Youth’ last night,” I reminded them. “Now I want to hear what you have to say about it. I’ll write down your responses as you say them.”

“I really do want to hear your own responses in your own words,” I finally said, breaking the painful silence. “It will help me learn how best to teach you.”

I don’t recall if I waited until the bell rang, with perhaps a final, “See you all tomorrow for another fun-filled class,” or whether I could not bear the early morning silence and finally began talking.

What I do know is I had lurched suddenly and awkwardly into my career as a high school English teacher, diverted from my intended path of continuing my graduate studies in English after completing a second BA degree at Oxford University.

It was President Nixon’s clandestine “Operation Menu”–the bombing of North Vietnamese and Vietcong bases in Cambodia in the spring of 1969–that put a sudden and abrupt end to those plans. The rising national resentment against the war grew to a white heat when it became clear that our “peace-with-honor” president was hell-bent on escalating this immoral and wildly unpopular war to a level of unheard-of grimness.

My local draft board went into full panic mode. “We understand you’re planning to teach,” they wrote. “If you wish to have your teaching considered as alternative service to the draft, you must submit a letter of acceptance from your employer by the end of April.”

Spurred into a corresponding panic, I booked passage and flew back to the states during my spring break, interviewing at half a dozen schools. Having no teaching credential, I wasn’t eligible for public school positions, so my search was limited to “independent day schools”–a polite way of saying “rather poshy private schools.”

By the time I’d returned to England two weeks later, I’d accepted a position teaching 10th and 12th graders in a K-12 day school in Wilmington, Delaware. The headmaster and chair of the English Department were graduates from my alma mater in western Massachusetts, and seemed not simply willing but eager to sign me on before my draft-driven deadline of late April.

But getting a teaching job was one thing. Actually teaching was another. How could I prepare for my classes with the roughly two week turn-around time between returning from England and beginning my first week of school? What might the ancient stone walls of Oxford have to offer the beginning American English teacher?

Increasingly anxious about my  lack of preparation, I wandered into downtown Oxford to browse the bookshelves of Blackwell’s Bookshop.

They had one small shelf on what they labeled “English education”—the teaching of English in secondary schools. One thin book with a pink cover caught my eye: Language, the Learner, and the School, written by James Britton, Douglas Barnes, and John Dixon.

Their writing was sporty and engaged: just the opposite of what I’d expected from a group of English educators. A few years later they published a joint monograph by “James Britton, Douglas Barnes, and the L.A.T.E John Dixon,” reminding readers in on the joke that they were all members of the London Association of Teachers of English.

But what really drew me in was their research.  What happened to students’ understanding, they asked, when they moved from the single authority of their elementary school teacher to the discipline-specific languages of their many middle school teachers?

And the way they pursued their research was equally compelling. “Have students gather in discussion groups,” they recommended, “and audio-tape them as they engage in ‘expressive’ conversations about what they’ve understood of their reading and classroom lectures.”

Encouraging students to use this “expressive” language, the London trio argued, would help students bridge the gap between the what they already knew and the “subject specific”  language used by their teachers.

So that’s what led me to my role as Cataloguer in Chief for my initial weeks of teaching. I was determined to listen as closely as possible to what my students had to say about the short stories that made up our initial 10th grade teaching unit.

Our initial short story, Conrad’s “Youth,” was a full out disaster, as I discovered for myself when I finally had the good sense to re-read it. I mean, what 10th grader on the planet would willingly continue a story that began “This could have occurred nowhere but in England, where men and sea interpenetrate, so to speak — the sea entering into the life of most men, and the men knowing something or everything about the sea, in the way of amusement, of travel, or of bread-winning”?

Thurber’s “The Catbird Seat” proved moderately more successful. Even sleepy-eyed 10th graders might find themselves hooked by “Mr. Martin bought the pack of Camels on Monday night in the most crowded cigarette store on Broadway . . . If any of the staff at F&S had seen him buy the cigarettes, they would have been astonished, for it was generally known that Mr. Martin did not smoke, and never had.”

But after enduring more periods of prolonged ‘wait time’ in those first two weeks than I care to recall, I realized my fundamental error. That London trio whose work I’d so admired were audio-taping students’ conversations about subjects they had actually been taught.

So, if I was going to ‘evesdrop’ on similarly interesting conversations, I damn well better start teaching my students some subject matter worth talking about.

I never wholly lost my conviction, however, that a healthy part of a teacher’s role should be Cataloguer in Chief. Years later, stumbling and bumbling into a similar first year teaching assignment at Columbia University’s Teachers College, I rediscovered my former convictions through a book my graduate students introduced to me: Writing Without Teachers, by Peter Elbow, with its central chapters describing the salient features of a “teacherless writing class.”

And perhaps, in holding to this contrarian view of the need for teachers to assume a lowered profile, I was recalling a parting discussion with one of my favorite 10th graders. It was three years later, and I’d more or less packed my bags for Yale University, where I’d be pursuing a graduate degree in English.

“Do you know what made your teaching special?” asked my young friend.

“You knew how to listen,” she said, “really listen to us. And we noticed.”

Dear Friends of the Writing Project,

On September 9, at our first Saturday Seminar session, an eager group of 3-5 students learned about oral story telling from Aeriale Johnson:

An equally engaged group of students and teachers participated in Katie Adelman’s workshop on using The Book of Qualities as a mentor text.

And a spirited group of teachers and students worked with Laurie Weckesser, using flash drafts to find a topic, then wrote their own essays defining their beliefs with the help of mentor texts:

Under the direction of Parent Program and Inservice Coordinator Andrea Katz, even parents got into the act.  Here they are using the same warm-up exercise that engaged their children (creating a “monster” both collectively and individually) to write their own stories: 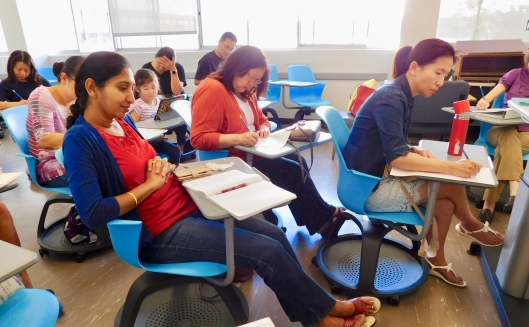 But the best is to come!

Our next Saturday Seminar, on Sept 30, will feature Jennifer Kim Baumgartner leading a traditional workshop specifically for K-2 teachers, on how to teach informative writing using technology, nonfiction books and mentor texts.  For those of you who’ve not had the pleasure of participating in a “Jennifer Kim workshop,” you’re in for a treat!

Our 3-5 group of teachers and students will be led by Alexis Doucette, who will focus on mapping your neighborhood to discover stories to write. This is sure to be a highly interactive session with lots of ideas you can use on Monday: 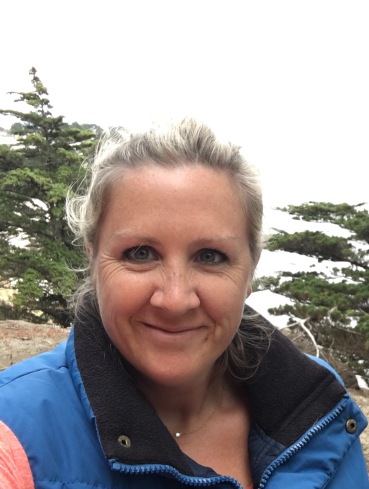 And new to our Saturday Seminar program, we’ll have young adult author and poet Margaret McMullen, from Pass Christian, Mississippi (see http://margaretmcmullan.com/about/) working with teachers and students at the middle and high school levels: 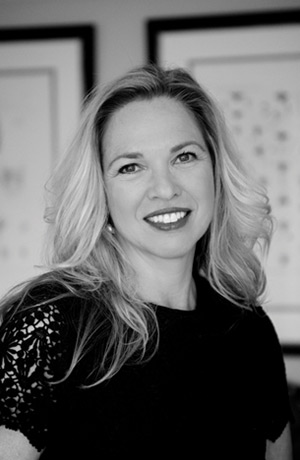 In order to prepare for this exciting line-up, we’ve re-configured our webpage (see http://sjawp.org/saturday-seminars/) to make it more convenient to sign up for either single or multiple sessions.

And as you’ll see, we’ve also added specific instructions for signing up for our PLC program. For this multi-session program, you pay nothing up front. When you arrive at SJSU to register, you fill out an Open University form for either 2 or 3 units at $150 per unit, and you are billed about three weeks later by the SJSU Bursar’s Office.

As the “instructor of record” for all our past PLC programs, I have had the pleasure and privilege of reading the papers written by our K to 12 PLC participants. In these papers, teachers explain what they learned from our Saturday Seminar sessions, as well as from their PLC cohort leaders and colleagues, and how they have implemented these ideas in their own classrooms.

It is simply exhilarating to hear what remarkable things are going on in these teacher’s classrooms! And as I read, I become convinced, once again, that this program provides what is simply the best PD in the Bay Area.  I urge you to experience this remarkable program for yourself, and I look forward to seeing you on Sept 30.

Linda Darling-Hammond on the “achievement gap”.

Jonathan Lovell on Creative Disruption, the Jabberwock, GERM, and Liberation.

Don’t know if liberation is actually part of my graphic essay, but it certainly would be pleasant if a bit more light and a bit less heat were generated on topic of the direction our national educational reform movement is taking us!

Introduction to Fall 2013 Site Report to the NWP.